The story of an old migrant watch
In a neighborhood in Istanbul, an abandoned and old-fashioned watch awaits on a stairwell. Previously owned by a Colombian ethnomusicologist, the watch keeps inside some hints about how music and time relate each other within Muslim mysticism.
An elder passing by finds it and takes it home with the idea of repairing it. A watchmaker finds a city inside the watch in which time-set specialists tell stories about philosophies of time, tuning, and about the homology between clocks and humans. Each of these stories lay out the tension between how the watch sounds like, and the aural perspective each character use to valuate it in contemporary Istanbul. After being repaired, the watch returns to its original place and continues the journey by its own.

REHAVI is the third audiovisual text released by Juan Castrillon about his research on Sufi Music in Istanbul. The film combines narrative and interviews as a way of crafting a style of ethnographic writing. The film has a length of 30 minutes, and it is spoken in Spanish and Turkish languages with English subtitles.
​
Juan Castrillon is anthropologist with 8+years of experience researching Sufi music practices in Turkey, and 3+ years researching Amazonian sonic practices in Colombia. His intellectual agenda explores the relation of bodies interacting with sound and general theories about space, imagination, and composite anatomies. Currently, he is a third-year graduate student in ethnomusicology at the Department of Music of the University of Pennsylvania. 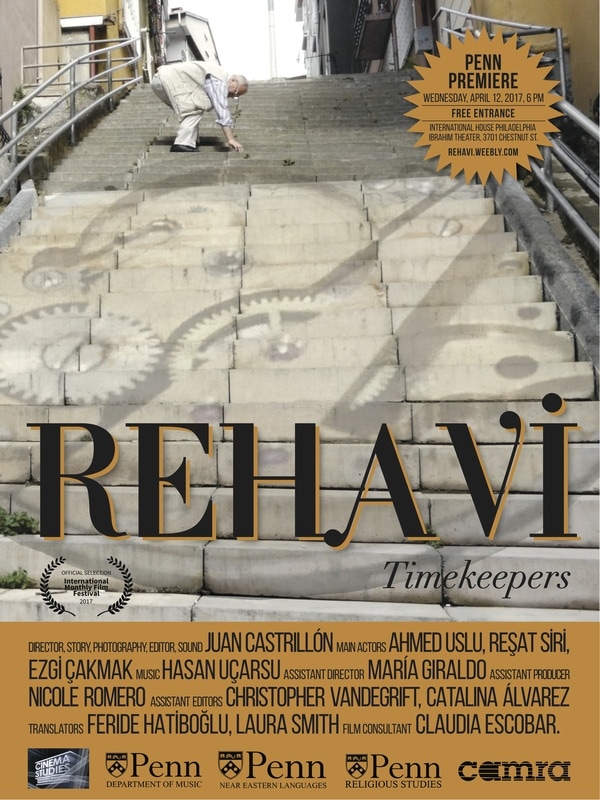